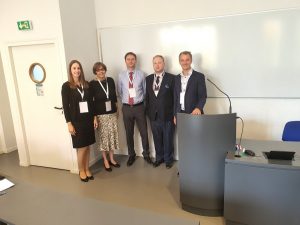 prof. Aleš Skřivan: The beginning of a strategic alliance between the Škoda Works and Schneider et Cie, Creusot in 1919

Immediately after the First World War, the Škoda Works, the most important arms manufacturer in the former Austro-Hungarian Empire, found themselves in a very complicated situation with an unclear future outlook. Given the security situation in Central Europe, the new Czechoslovak government had a huge interest in the stabilization of the Pilsen enterprise and considered several stabilization options. In the end, the new Czechoslovak political elite supported a connection between the Škoda Works and the French group Schneider et Cie, Creusot.

This decision was influenced not only by political and economic factors, but also by, among other things, the personal relations between significant representatives of the Škoda Works and Schneider. Mainly in the period from May to September 1919, many complicated negotiations were held that resulted in the sale of Karel Škoda’s majority stake in the enterprise. Most of Karel Škoda’s shares were acquired by the Schneider Group, and in September 1919, the new majority shareholder was officially confirmed at the Škoda Works general meeting. The relations between the Škoda Works and Schneider were frequently complicated in subsequent years. Nevertheless, the entry of the French investor into the Pilsen enterprise in 1919 was a mutually beneficial step from which both sides got unmistakable benefits.

Conference article analyses interaction of the French concern Schneider et Cie and Czechoslovak Škoda Works in the field of the interwar arms exports. By that time Škoda Works was one of the cornerstones of the Czechoslovak industry, specialized in engineering, light and heavy machinery and arms production. After the entry of Schneider et Cie as the majority shareholder in the 1919 the arms exports were governed by so-called „Artillery/Territory Convention“ of 1922. The contract set up „spheres of interest“ in trade with artillery products. The Convention articles also covered mutual compensations and bonification for exports realized by the other company. The contract advantaged Schneider et Cie and dramatically narrowed means of Škoda Works to export its arms production, but regardless of that it can be stated that there were many exemptions and permitted deviations. Financial settlement between both companies worked almost only in the first half of the 1930’s. In later 1930’s information about individual arms exports was intentionally clouded as domestic and international political circumstances developed. The new Artillery/Territory Convention was introduced in 1937. The new Convention favored Škoda Works in territorial distribution of trade better than the former one, but its practical realization was impinged by not favorable development in international affairs. The rapidly worsening situation let Schneider et Cie to sell out shares in Škoda Works to the Czechoslovak Republic in 1938 which in effect meant dissolution of the Artillery Convention. Schneider et Cie was paid one-off compensation. Legality of dissolution of the Convention and was discussed with Czechoslovakia after the WW2.

Ing. Jakub Drábek: The issue of the sugar industry in France and Czechoslovakia in the inter-war period

The development of modern, industrial sugar factories on a European scale been linked to a continental blockade. France belonged to the importance of sugar consumers and therefore had to ensure its sufficient production. Already before the First World War, the sugar industry in France and Czechoslovakia been established and ensured a stable supply to its residents. The main problems in sugar industry after the First World War displayed itself in attempts to stabilize and during post-war renewal. The paper focuses on the issue of co-operation and competition between the sugar industries.